Home › Equality before the Law

Equality before the Law

Posted on February 11, 2019 by Pr. Joubert (Legal Protection of Health Freedoms) — No Comments ↓

Equality before the law, also known as equality under the law, equality in the eyes of the law, legal equality, or legal egalitarianism, is the principle that each independent being must be treated equally by the law (principle of isonomy) and that all are subject to the same laws of justice (due process).[1] Therefore, the law must guarantee that no individual nor group of individuals should be privileged or discriminated against by the government. Equality before the law is one of the basic principles of liberalism.[2][3] This principle arises from various important and complex questions concerning equality, fairness and justice. Thus, the principle of equality before the law is incompatible and ceases to exist with legal systems such as slavery, servitude, colonialism, or monarchy.

Article 7 of the Universal Declaration of Human Rights (UDHR) states: “All are equal before the law and are entitled without any discrimination to equal protection of the law”.[4] Thus, everyone must be treated equally under the law regardless of race, gender, national origin, color, ethnicity, religion, disability, or other characteristics, without privilege, discrimination or bias. The general guarantee of equality is provided by most of the world’s national constitutions,[5] but specific implementations of this guarantee vary. For example, while many constitutions guarantee equality regardless of race,[6] only a few mention the right to equality regardless of nationality.[7] 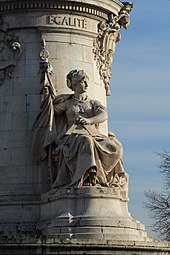 Statue of Equality in Paris as an allegory of equality

A legalist Guan Zhong (720–645 BC) declared that all persons under the jurisdiction of the ruler are equal before the law. The 431 BCE funeral oration of Pericles, recorded in Thucydides’s History of the Peloponnesian War, includes a passage praising the equality among the free male citizens of the Athenian democracy:

In ancient times, violent repression of even basic equality was commonplace. Despite the recent overthrow of the Roman monarchy and the establishment of the Roman Republic and sacrosanct Tribunes of the Plebs, Cincinnatus’s son Caeso led a gang that chased plebs from the forum to prevent the creation of equitable written laws. In Rome’s case, the organization of the plebs and the patricians’ dependence upon them as both laborers and soldiers meant the Conflict of the Orders was resolved by the establishment of the Twelve Tables and greater equality. Nominally, all citizens except the emperor were equal under Roman law in the imperial period. However, this principle was not implemented in most of the world and even in Europe the rise of aristocracies and nobility created unequal legal systems that lasted into the modern era.

Lliberalism calls for equality before the law for all persons.[2] Classical liberalism as embraced by libertarians and modern American conservatives opposes pursuing group rights at the expense of individual rights.[3] However, Lockean liberalism (the foundation for classical liberalism) is interpreted by others as including social rights and responsibilities.[9]

In 1988, prior to serving as a Justice of the Supreme Court, Ruth Bader Ginsburg wrote: “Generalizations about the way women or men are – my life experience bears out – cannot guide me reliably in making decisions about particular individuals. At least in the law, I have found no natural superiority or deficiency in either sex. In class or in grading papers from 1963 to 1980, and now in reading briefs and listening to arguments in court for over seventeen years, I have detected no reliable indicator or distinctly male or surely female thinking – even penmanship”.[11] In an American Civil Liberties Union’s Women’s Rights Project in the 1970s, Ginsburg challenged in Frontiero v. Richardson the laws that gave health service benefits to wives of servicemen, but not to husbands of servicewomen.[12] There are over 150 national constitutions that currently mention equality regardless of gender.[13]

Article 200 of the Criminal Code of Japan, the penalty regarding parricide, was declared unconstitutional for violating the equality under the law by the Supreme Court of Japan in 1973. This was a result of the trial of the Tochigi patricide case.[14]